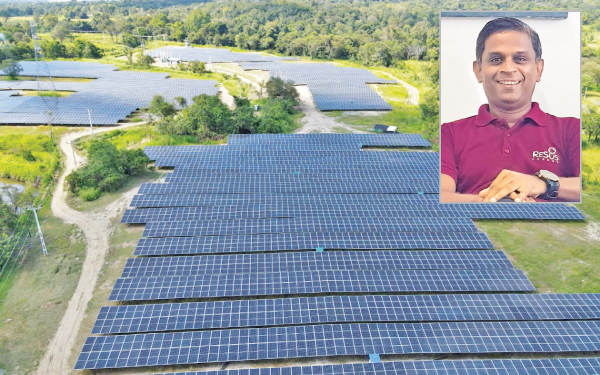 Further expanding its portfolio, Resus Energy PLC, a forerunner in renewable energy, recently connected a 6.0 MW ground mounted solar PV (photovoltaic) station to the national grid. This comes at a crucial time when the country is facing a massive power crisis resulting from fuel scarcity to operate thermal plants, which in turn results from a forex shortage and unaffordable global fuel prices.

Located in Rideemaliyedda, and connected to the Mahiyanganaya grid substation, the development rights of these projects were secured from the government’s Soorya Balasangramaya tender floated to procure 90 x 1MW Solar PV projects.

Built at a cost of over Rs. 1 billion with state-of-the-art equipment encompassing tier-1 solar PV panels, top-of-the-range inverters, and other auxiliary equipment, the power station is expected to generate about 9 million units of electricity (9 GWh) annually. This is Resus Energy’s second solar PV site. Now together with its first site in Siyambalanduwa, Resus supplies 8 MW of solar power to the national grid.

The project was developed under extremely arduous conditions. Navigating through long lockdown periods, the project was badly affected by hyperinflation and scarcity of construction and other input materials; transportation challenges; forex crisis leading to inability to open LCs; and making suppliers settlements.

With this one, Resus now operates 11 utility-scale grid-connected power stations with an aggregate capacity of about 24MW and estimated annual energy generation of over 60GWh.

“We still delivered this one despite operating in impossible conditions against all odds. This demonstrates our commitment to partake in fulfilling the country’s dream of becoming an energy secured nation”, said Kishan Nanayakkara, Managing Director, Resus Energy.

“Sri Lanka is paying dearly because of renewable energy shortage. We are having blackouts impacting people’s lives and business and at the same time idling thermal plants due to fuel shortage. That’s ironic. Our economy is pushed to a perilous state for having to pay astronomical prices for fuel to even have a limited operation of our thermal plants.”

“Resus Energy’s newly connected solar PV station gives a huge economic benefit to the nation, supplying electricity at about Rs.15/- unit for the next 20-years, which is below CEB’s current average selling price, enabling it to make a profit from each unit.”

Over the last few years, Resus Energy consistently won awards and accolades for its reporting and sustainability work from CA Sri Lanka and ACCA. It has also won merit award from South Asian Federation of Accountants (SAFA) and has also been a winner of the National Green Awards.