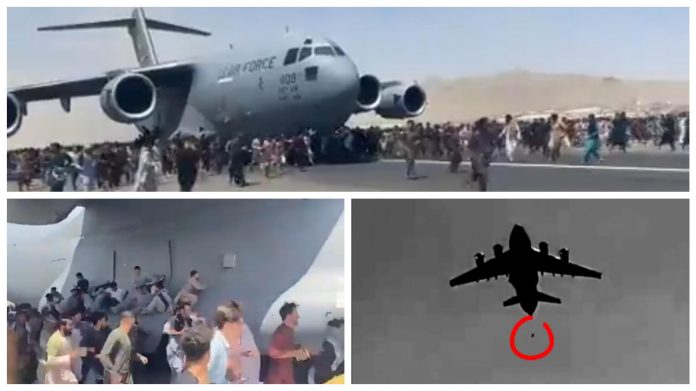 With the Taliban establishing its rule over Afghanistan after completing the capture of capital Kabul, shocking visuals from the country are pouring in showing panic-stricken people desperate to flee the country.

Shortly after a video of a huge crowd jostling to get into an aircraft at Kabul airport flooded the social media on Monday, another unforeseen video splashed TV screens all over. The unbelievable video showed an airplane taking off from Kabul airport and at least two people falling off the giant plane. According to reports, locals near Kabul airport claimed that they saw three men holding themselves onto the wheels of the aircraft and later fell to their death.

“One of the locals confirmed this and said that the fall of these people made a loud and terrifying noise,”Asvaka News said in a tweetEarlier, at least 5 people were killed and several others were injured in firing at Hamid Karzai International Airport in Kabul. The incident took place when hundreds of people tried to forcibly enter planes leaving the Afghanistan capital fearing an onslaught by the Taliban. (Indicate)

18 elephants killed by lightning during an Indian storm